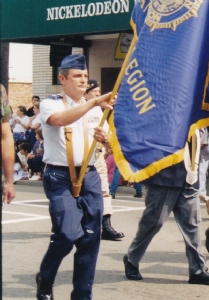 Walter J. "Butch" Wieczorek, Jr.,  of Hopewell Twp., age 73, died on Thursday, July 21, 2022. Beloved husband of 32 years of the late Dineen M. (Szady) Wieczorek; loving father of Doreen (Steven) McKenna, Darleen (Thomas) Trunzo and Christine (Christopher) Jiuliante; dear jadziu of Justen and Alexandra McKenna and their expected little one, great grandson, Parker McKenna, and Joshua McKenna and Matthew Trunzo; brother of Thomas Wieczorek, Elaine (James) Barbera and Kathy (Timothy) Thomas. Also survived by nieces and nephews. Butch was a proud veteran who served with the U. S. Air Force during the Vietnam war and both desert shield and desert storm. He retired at the rank of Master Sergeant after 25 dedicated years of service. He was a member of the Coraopolis VFW, American Legion, and the Elks. He was also an avid golfer. Friends received 2 - 4 & 6 - 8 pm, on Tuesday and Wednesday at R. D. Copeland, Inc., 981 Brodhead Rd., Moon Twp., where a funeral prayer will be held on Thursday at 10 am followed by a Funeral Mass in St. Margaret Mary Church at 10:30 am. Burial will be at the National Cemetery of the Alleghenies. In lieu of flowers, the family suggest a donation be made to a charity of donor's choice.